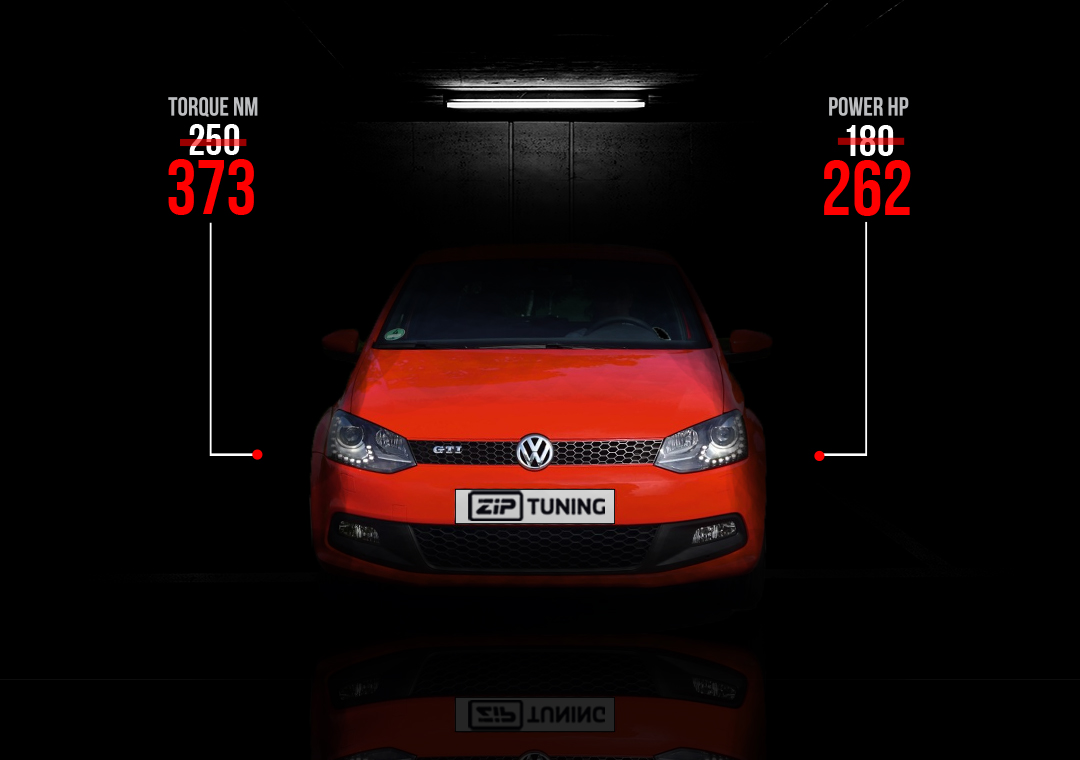 The Volkswagen Polo is a supermini that is basically a smaller and cheaper version of the revered legend that the Golf is. However, Polo quickly gained a dedicated following that has made the tiny car one of the longest lasting models in history, its production lasting from 1975. This kind of popularity and long life also means that it is a smart move to introduce somewhat special models of the Polo and this is how we got the Polo GTI. The 6R generation of the sporty car packs a mighty 1.4 TSI (1390 cm3) CAVE engine. Now, 1.4 may not seem like all that much, but the car packs twincharger technology which puts together a turbocharger and a supercharger adding up to the power of 130 kW (180 hp) and 180 lb-ft (250 Nm) of torque. Aside from the extra power, this kind of forced induction also means that the car pulls from low rpm easier, which is bluntly obvious from the fact that maximum torque is available from as low as 2000 rpm – once again, from a 1.4 l petrol engine.

This kind of power and flexibility, as well as the fact that the 6R is significantly lighter than the previous model, translate to the 0 – 62 mph time of 6.9 s, or 6.7 s, depending on the gearbox choice and the top speed of 142 mph (229 km/h). However, the power can rise significantly, taking it well over the rating that the Golf 7 GTI has, meaning that the younger and smaller brother easily leaves the big one behind.
How? Tuning, of course. ZIP Tuning has an elaborate tuning programme for the VW Polo GTI 1.4 TSI tuning and it includes three upgrade stages that up the power by almost 50%. You do not need to go that far, since the three stages offer versatile possibilities both in terms of prices and performance. Here’s what they offer.

Yes, the Stage 1 is just remapping of the OEM ECU. In spite of the fact that it bears no new hardware parts, Stage 1 gives a significant boost over the stock model. The remap of the Polo GTI consists of several not very substantial changes, but the sum of their effects is outstanding.

The Stage 1 1.4 TSI tuning process begins with a slight enhancement of the turbocharger pressure. The supercharger pressure could also be altered by the implementation of a different pulley, but it could be too much of a stress for the system, so using the ECU software mods to improve the turbo pressure was a better, safer and more efficient upgrade overall.

The extra turbo pressure increases air load so, in order to keep the mixture as it should be, extra fuel is added by adjusting the injection. This ensures proper combustion and safe operation of the system.

Lastly, ignition needs to be adjusted. More air and fuel will need more time to burn completely, so ignition timing is moved to an earlier stage. This advancement has an additional advantage of improving the throttle response. Now, modern petrol engines already react really well, while added forced induction makes this even better. Having a supercharger that is connected to and dependant on the crankshaft revolutions also means that the engine enjoys forced induction even before the turbo kicks in with full force. This is why it is really difficult to explain how good the throttle response is after advancing the ignition. The car as stock jumps at every throttle pedal push, but after Stage 1 ZIP tuning it seems to go a step ahead of the driver’s actions. 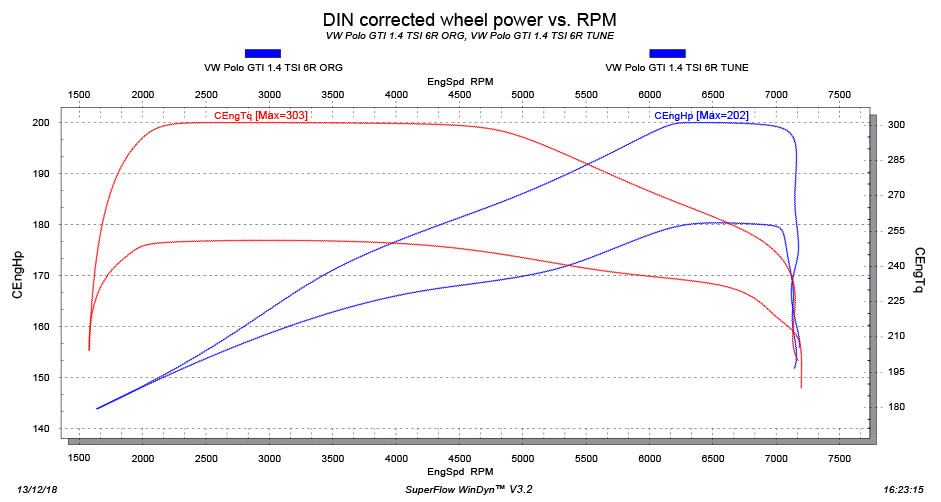 These upgrades add up to give 149 kW (202 hp) and 223 lb-ft (303 Nm) of torque. This kind of power is completely safe, as you can see from the previous part, and it is developed according to the measurements obtained from the 4×4 Super Flow Dyno and Dyncom test bench. Safe stress levels are never exceeded and everything works perfectly well with stock parts only, so our 1.4 TSI tuning is as safe as it is efficient.

Stage 2 goes a step further by adding new hardware parts. These parts do not put more stress on the engine, but actually relieve some of it, since they consist of intake and exhaust parts. They start with a new cold air intake supplied by Forge Motorsport and a high-performance intercooler from the same aftermarket company. The other end of the engine breathing system comes in the form of a new exhaust sourced from either Super Sprint or Milltek. After adding the new parts, the car is again dyno tested to smooth the operation. 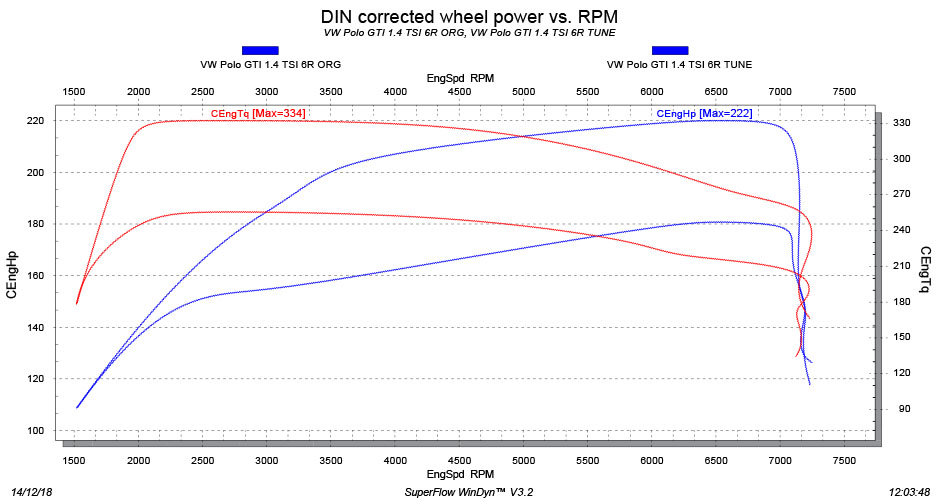 These parts help greatly with engine breathing and thus make its life longer, while adding a bit of power. The power rating now stands at 163 kW (222 hp) and 246 lb-ft (334 Nm) of torque which is enough to help the tiny Polo be as powerful as the Golf 7 GTI, while being significantly lighter.

If you thought that the power gain from hardware parts was not big enough to stand alone, you were right. The Stage 2 hardware parts actually serve to prepare the field for the biggest improvement that the Stage 3 comes with – a new turbo. The high performing unit comes from LOBA and it boosts the pressure to provide the power of 193 kW (262 hp) and 275 lb-ft (373 Nm) of torque. This makes the car a lot faster than the Golf 7 GTI and actually turns it into a proper track machine suitable for dedicated and capable drivers. The one downside is the fact that you can get the Stage 3 only if your Polo GTI comes with a manual, since the seven-speed DSG cannot accompany the Stage 3 ZIP tuning for the VW Polo GTI. However, this is not such a big downside, since the drivers that the Stage 3 tuned Polo is aimed at will usually prefer the manual anyway. 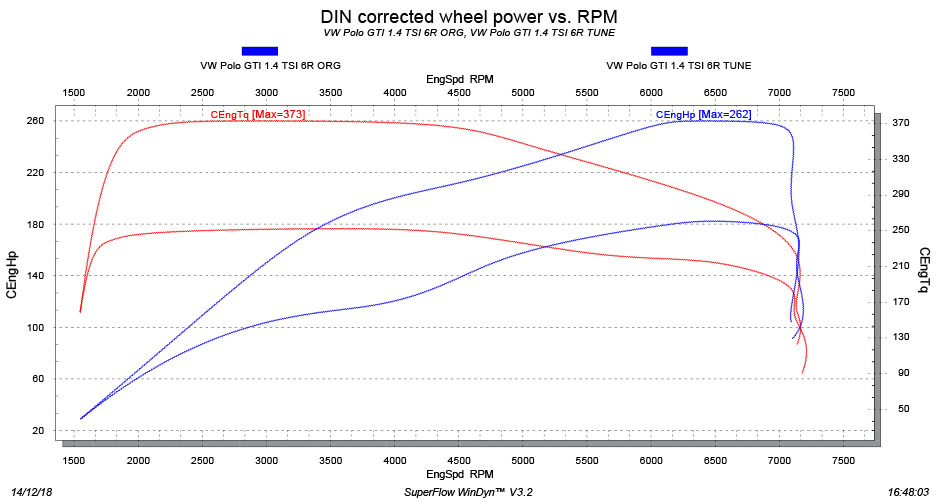 The stock Polo GTI is, well, a GTI. It is a capable hot hatch that is by no means dull to drive. It is aimed at the people who enjoy high-performance lightweight cars and those are the ones who will surely welcome a power increase of almost a half of the original horsepower. If you are one of those, ZIP Tuning is the place for you.

Contact us to see what we can do for your car or, if you are a tuner, register and use our expertise to distinguish yourself on the tuning market.