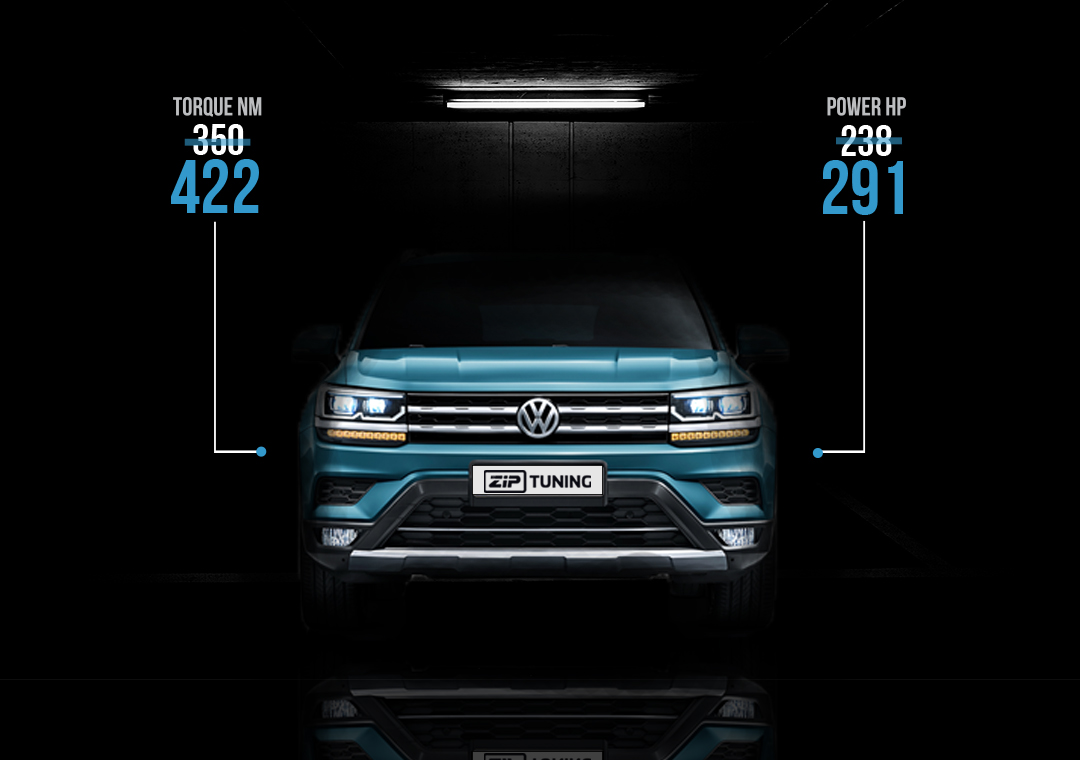 The Atlas is the latest SUV from Volkswagen and it serves to woo the American market. It comes with two engines – an I4 turbo and a 3.6 VR6 – and they are both petrol/gasoline units. The smaller one is obviously aimed to serve as the entry-level version, but Volkswagen Atlas tuning by ZIP actually makes it noticeably more powerful, while preserving all the benefits of the downsized displacement.

The Atlas holds a number of modern, advanced features designed to pamper customers used to high-end luxury SUVs. The engines are paired with a wonderfully smooth 8-speed Tiptronic, stunning Digital Cockpit, loads of interior space and practicality and the latest safety features.

Engine options include a 2.0 turbocharged one with 238 hp and 350 Nm of torque. The second one is a 3.6 VR6 with 280 hp and 361 Nm of torque. It is obviously intended to be the more desirable option, but the fact that the 2.0 TSI is far more modern and also turbocharged gives a lot of room for improvements from Volkswagen Atlas tuning. Moreover, it produces the top torque figure far lower than the V6, which makes it far more usable in everyday driving conditions.

We have recently tested the improvements on a customer’s Atlas and the results are stunning. Following special requirements from the customer which limited the scope on tuning in order to ensure significantly lower consumption, we still managed to extract 291 hp and 422 Nm of torque from the 2.0 TSI engine. Had the customer wanted to extract all the power from the engine, we are confident that we could have provided him with more than 300 hp and about 450 Nm of torque.

The 2.0 TSI in the VW Atlas makes use of forced induction, which enables us to work our magic on the engine and extract the extra power and torque without any hardware modifications. You get stock parts, complete safety and far more power. Perfect, isn’t it?

The improvements start with an increase in turbo pressure. This is a software adjustment that results in the increased amounts of air being sent to the engine. If you are familiar with how internal combustion engines work, you will know this also means we needed to add more fuel as well to keep the air/fuel ratio at the stoichiometric level. Doing this provides more power, but also smoother engine operation and better combustion.

Very importantly, going too far with these two steps can be very detrimental to the engine, so our testing and data logging done using top-notch equipment play an essential role in 2.0 TSI Volkswagen Atlas tuning.

However, this is not the end of adjustments.

The next step does not add heaps of horsepower, but it does improve the driving feel immensely. It is an advancement in ignition timing, which makes better use of the newly gained power and makes the car react faster to your push of the pedal. Combined with the added boost, it makes driving the 2.0 TSI Atlas far more interesting.

It is important to point out that testing plays a major role in ignition timing tuning. Exceeding safe boundaries and advancing ignition too much can cause serious damage for the engine. Detailed testing, loads of experience and knowledge, the best equipment and sheer love of the industry allow us to clearly define boundaries, reach them as close as possible, giving unmatched performance, but never exceed them, ensuring safety and reliability of your vehicle. 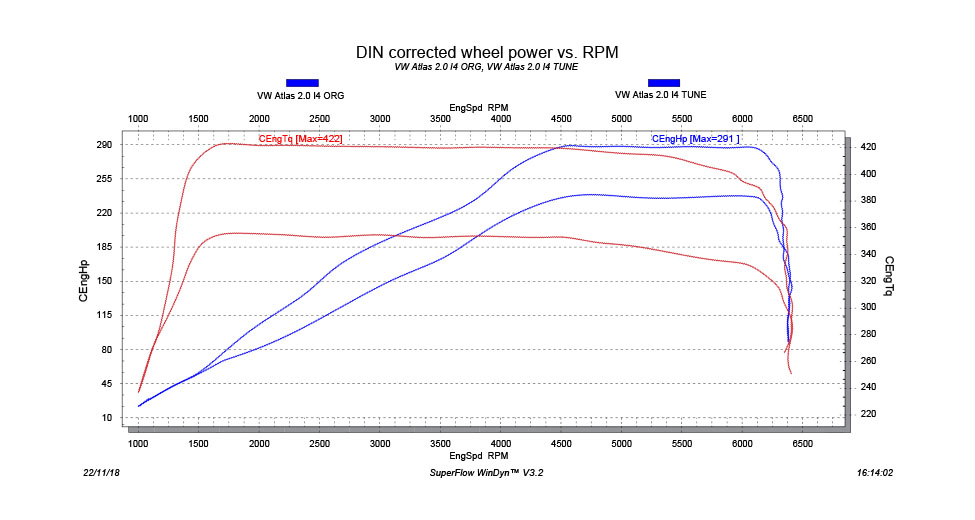 The 2.0 TSI in the stock form falls a bit behind some of its competitors. The 2.3 in the Ford Explorer, for example, has 280 hp. However, after Volkswagen Atlas tuning performed by our expert engineers from ZIP, not only does it make the V6 obsolete, but it also makes the 2.3 Explorer fall behind.

We have tuned a number of the latest Volkswagen vehicles and engines recently, including the Arteon with the 2.0 TSI that we also easily pushed way beyond the V6 version to massive 354 hp and 466 Nm of torque or the 1.5 TSI T-Roc whose owner now enjoys 182 hp and 302 Nm.

Aside from Volkswagen, we also tune numerous other vehicles from almost every manufacturer in the world. If you are an owner who wants more power, ZIP Tuning is here for you. And if you are a tuner looking for a solid partner at the top level – you will love us. 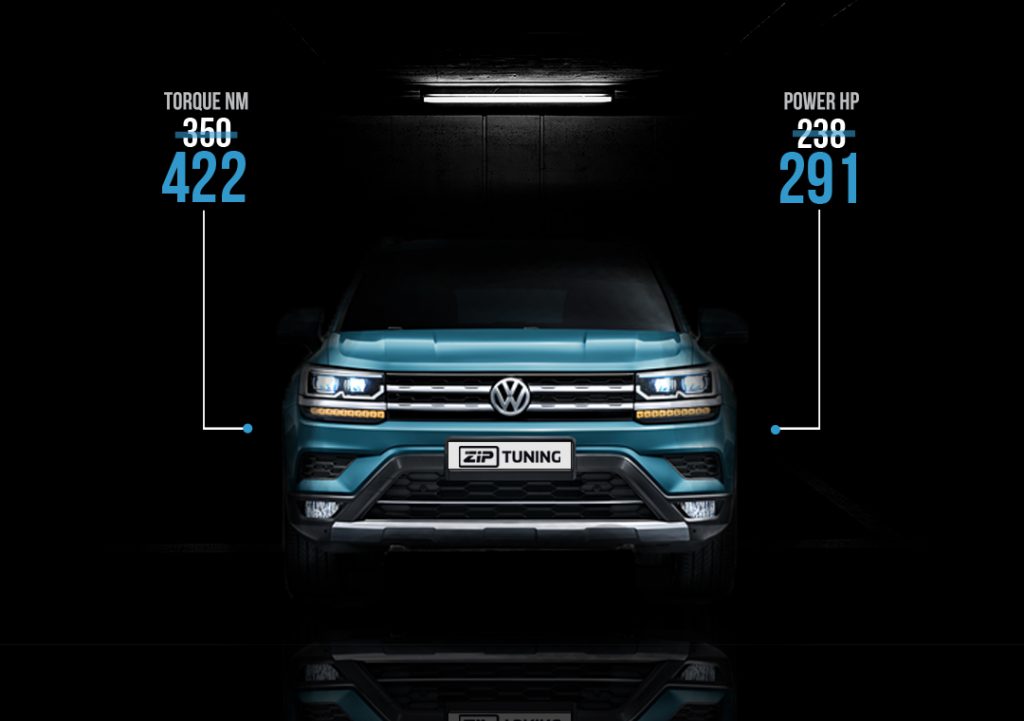