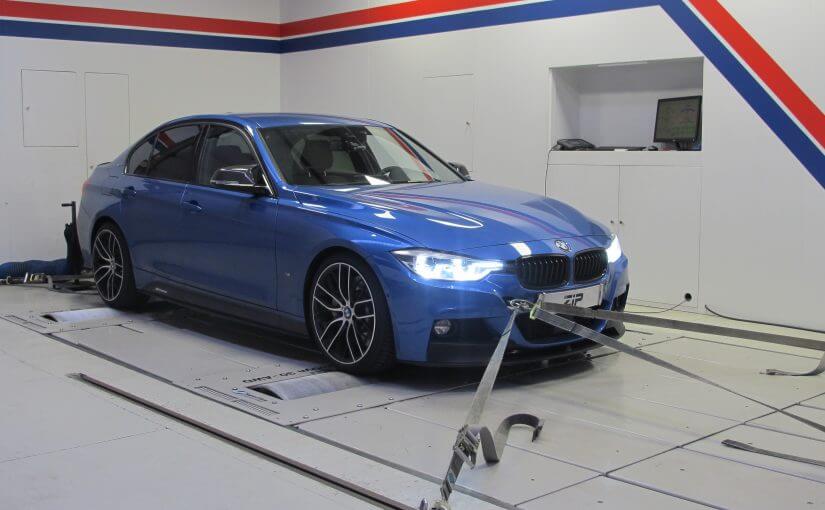 After a very successful project we developed for National Geographic’s show Supercar Megabuild where we developed the tune used to make a sensible Porsche Panamera Hybrid a proper supercar, we’ve been getting more and more requests for tuning hybrids and our latest creation is this BMW 330e iPerformance.

Tuning hybrids requires a somewhat different approach to the one used on cars with internal combustion powering system only. Beating the challenge of complementing the original software architecture and making it operate perfectly with the electric motor has been a highly rewarding experience and we’ve established ourselves as experts.

The fact that this is BMW’s fourth plug-in car was very important for us. It meant that it comes from a decent line of development and tests. Now, we have no doubt that BMW has a remarkable development team and that they thoroughly test their cars, but simply put, there is no way that any tests could replace years of on-road experience gathered from thousands of customers in different locations.

Well, the 330e iPerformance came after all that done with the likes of the i3, i8 and X5 xDrive40e.

The car we started with had a 2.0 l internal combustion petrol engine and an electric motor. The petrol unit produced 180 hp and 291 Nm of torque, while the electric motor added another 87 hp and 250 Nm of instantly available torque at any revs. This is an inherent feature of electric motors and it makes the world of difference for the driving feel.

The electric motor is cleverly placed into the housing of the Steptronic Sport gearbox and the combined system power and torque figures stand at 252 hp and 420 Nm of torque. It may not seem like much, but it is actually a very good drive – and a sensible one at the same time.

For example, the car reaches 100 in 5.9 seconds and has the top speed of 225 km/h. Its electric only range is not huge – floating between 22.5 km and 40 km at speeds up to 120 km/h depending on the testing cycle – but this also means that the battery is smaller, lighter and there to help effortlessly, rather than give more autonomy but also hamper driving dynamics with massive weight of larger battery packs.

Yes, even in a sensible hybrid BMW did not forget driving dynamics and performance. The official average fuel efficiency stands at about 2 l per 100 km, which is amazing for a sedan with about 250 hp that costs less than a groundbreaking fortune.

The electric tech came directly from highly praised i3 and i8, while the engine is a TwinPower turbo machine which managed to snatch the International Engine of the Year Award twice. So, basically, this powertrain is a mixture of two thoroughly tried and tested systems that work together like a charm. 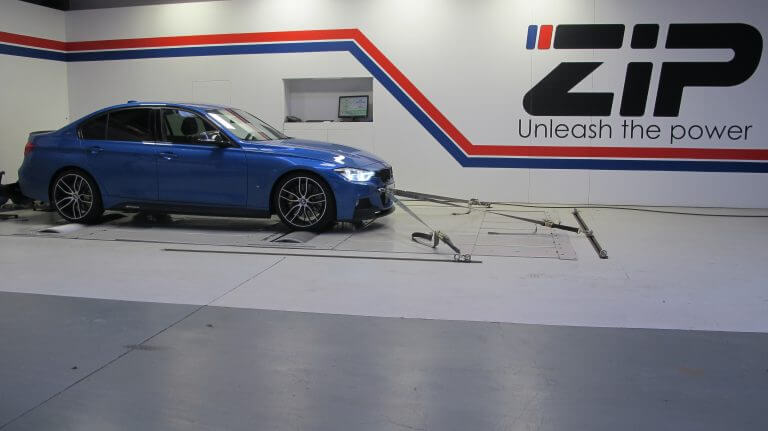 We do offer additional tuning stages for the BMW 330e, but this particular customer felt that our Stage 1 tuning resulted in more than satisfying gains. Here is what we did.

For this project, we started off with a change in turbo pressure which resulted in sending more air to the combustion chambers. After this, we readjusted fuel delivery to complement the additional air and make the most of stoichiometric ratio.

This has to be done with care and alongside extensive testing, as having efficient air-fuel ratio throughout the rev range is one of the most important aspects of any internal combustion engine’s operation.

This brought significant improvement in the power department, but we’ll get to the numbers in a minute. Before that, we found room for another improvement which did not greatly increase power per se, but made a huge difference in the driving feel.

Namely, we advanced ignition timing. It helps the additional air and fuel combust better and also improves throttle response. This was actually one of the first things that the customer noticed. The car reacts to the throttle push instantaneously.

However, advancing the ignition too far is very dangerous for the engine. That operation requires expertise, needs to be done carefully and needs to be tested during the process. This is why our experience, equipment and dedication are paramount.

Just as an example of what this part of the tuning process includes, let us tell you what we did during the ignition timing adjustment.

The timing is not the same throughout the rev range. As you probably know, every engine exerts top power and torque levels at a limited rev range. This rev range is always towards the middle of the rpm array. The wider the torque curve, the more available the torque. Modern cars have a wider torque curve, but we managed to widen it even further, making BMW 330e driving experience noticeably better.

How did we do this?

In low revs we advanced ignition timing in order to improve throttle response and increase torque. Of course, we needed extensive testing to make sure we advance it as much as possible for maximum results, but not go too far as that would cause engine damage.

As the revs increase and the pressures inside the cylinder rise, we start retarding ignition to prevent going too far and damaging anything. As we get past this point and the torque starts dropping again, we advance the timing again to give the car more push in that section as well.

This way we managed to improve drivability in a very wide rev range and preserve safety at times when cylinder pressures reach maximum levels.

Also, we make sure to set the timing in a way that we make the best use of the energy generated inside the engine. When a spark ignites the air-fuel mixture in the cylinders, it spreads the flame and gradually increases cylinder pressure. For maximum results, we needed to set up the ignition timing so that it builds up the pressure and reaches its maximum value exactly when the connecting rod is at the angle that allows it to make the best use of the energy.

This segment alone should show you the importance of testing and data logging, not only in terms of safety, but also making the most of the available performance figures.

So, what are the figures? 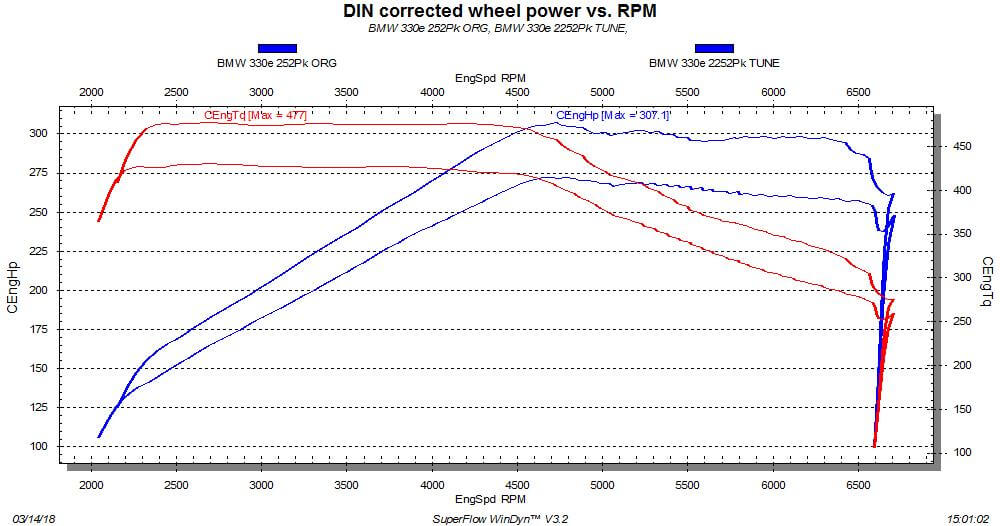 The ZIP tuned BMW 330e iPerformance now has 307 hp and massive 477 Nm of torque. This is with no hardware changes, just our meticulously precise software adjustment. We can develop tunings for at least two more stages for the 330e, the second one including intake and exhaust parts improvements and the third one using more capable turbochargers, intercoolers, injectors and other accompanying parts.

Aside from the top power and torque figures, we are especially proud of the smooth delivery across the rev range and greatly improved drivability in everyday conditions.

If you have a BMW 330e and you wish to make it noticeably better, but also completely safe and as reliable as ever, feel free to contact us and let us open a whole new chapter for you and your car.