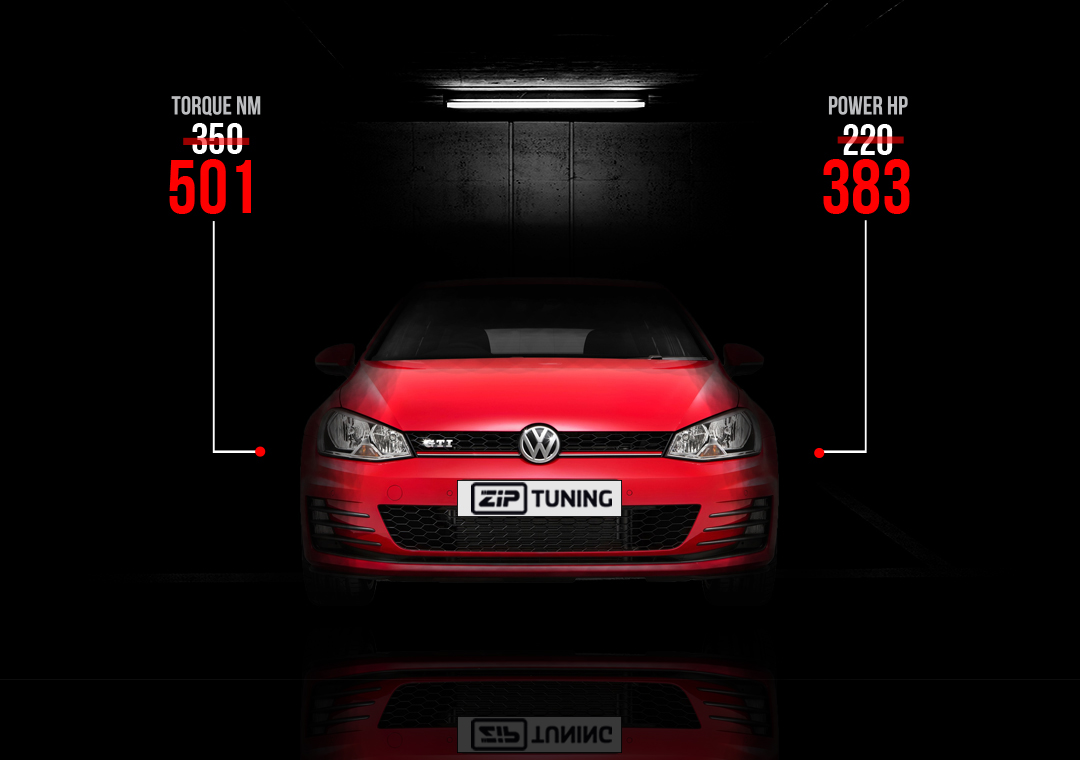 The Volkswagen Golf 7 GTI is a performance-oriented version of one of the most revered hatchbacks in history. It is also what made other companies turn to making such cars and while the AWD Golf 7 R has the greatest power, the true-to-its-origins FWD GTI remains the wet dream for most. Well, there is a way to marry the love of origins and the love of ultimate power. ZIP Tuning provides three+ stages of power boost for the VW Golf 7 GTI tuning project, resulting in far more power than the R version has. You don’t believe? How about 390 hp in the GTI?

The Golf GTI is a legend. In 1975, just a year after the first VW Golf appeared, its sporty version came and to this day it has remained one of the most revered sporty hatchbacks ever. Its seventh generation comes packing a mighty 2 l CNTA engine with 162 kW (220 hp) and 350 Nm (258 lb-ft) of torque which is about twice as much as the Golf 1 GTI had. This gives it the 0-100 km/h time of 6.6 seconds and the top speed of 152 mph. An optional performance package gives 10 hp extra and drops the 0-100 time to 6.5 seconds, clearly separating the Golf 7 GTI from its competitors, such as the Audi S3 1.8 T. However, there is a hot hatchback out there that is far more powerful than the legendary GTI – the Golf 7 R. With 300 hp it is a seriously more powerful car and thus it commands a greater price. However, you easily upgrade the GTI to match and even surpass the R version. All you need is a little help from us.

There are three stages for the Golf 7 GTI tuning and they result in massive improvements in power rating, the first one matching the power of the R, and the rest leaving the “ultimate hot hatch” behind. Yes, you’ve read it right: you can actually have more power than in the Golf 7 R and for less money. Let’s see how.

Yes, the Stage 1 is just chiptuning, dealing with additional settings to the OEM ECU. There are no new parts whatsoever, so you might think that the power gain can’t be all that noticeable with stock parts, but, as we have already said, after the ZIP Stage 1 VW Golf 7 GTI tuning the car easily measures up to the beastly Golf 7 R. Here is what they do to make it so.

The turbo remains the same, but it provides more air for the engine since our engineers noticeably increase the turbo pressure. This means that there is more air in the cylinders and that is what makes the biggest difference.

However, all that air needs to burn efficiently, so additional tweaks are needed. The engine needs more fuel, so more petrol gets fed to the combustion chamber.

Ignition timing is also adjusted (moved to an earlier stage) and this has several benefits. First of all, it improves combustion. Secondly, throttle response gets significantly better and even an inexperienced driver will know to enjoy this effect. All of these things also add up to the increased power output, making the Golf 7 GTI a lot better after Stage 1 ZIP tuning. 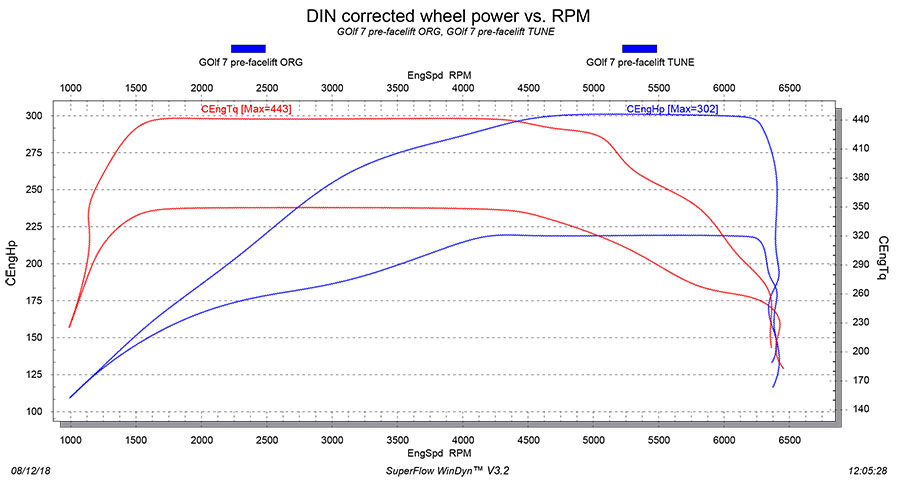 The result is at about 222 kW (302 hp) and 443 Nm (327 lb-ft) of torque, which makes the Golf 7 R surplus since its cheaper counterpart from the same factory now produces about the same amount of power. The acceleration to 100 km/h now takes just over 5.5 seconds and the lack of speed limiter makes the Stage 1-tuned Golf 7 GTI a lot better at the top end, compared to the stock car.

Now, such a power boost may seem like too much for the stock parts, but not a single part gets overstressed above the safe limits stated by the manufacturer. This power boost is as safe as it is fun.

The ZIP Stage 2 VW Golf 7 GTI tuning goes a step further. It adds some new parts to help increase the power further. The parts, however, still stay completely safe for the rest of the car. The car gets a new exhaust with a sport catalyst. The exhaust providers are only top class aftermarket parts manufacturers such as Milltek, Akrapovic, Super Sprint, or Army Trix. The choice of the manufacturer of the exhaust is totally up to you, since whatever you choose to install, the car gets dyno tested and the ECU reprogrammed to ensure smooth operation. 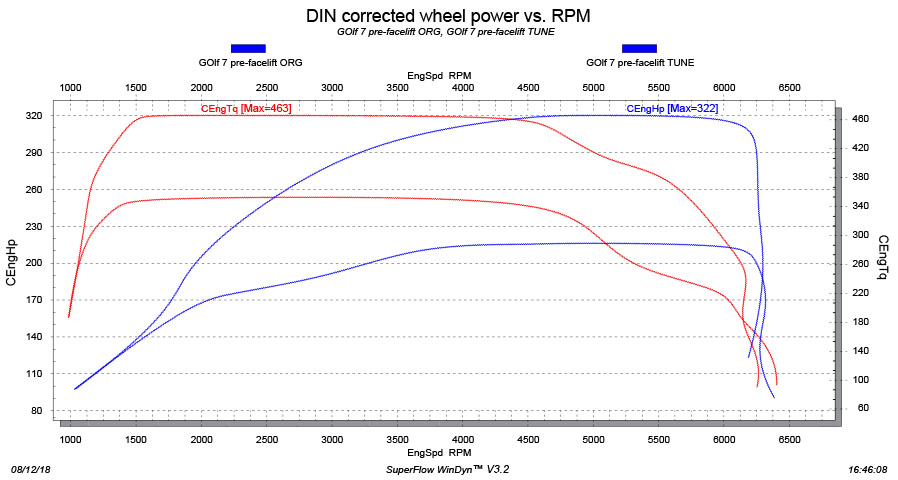 The new parts and the OEM ECU tweaks get the power up to 237 kW (322 hp) and 463 Nm (341 lb-ft) of torque, making the tuned VW Golf 7 GTI more powerful than the VW Golf 7 R. The car remains completely safe, since a better exhaust actually means that the engine gets rid of the exhaust gasses faster, which can only be beneficial. But there’s more.

Stage 3 brings out the big guns. A higher performing turbo is installed and you again get to choose between manufacturers, with LOBA 410 and TTE being offered. Both of these again provide the same boost and the power gets to 282 kW (383 hp) and 501 Nm (369 lb-ft) of torque, which is close to double as much as the stock Golf 7 GTI has. This upgrade works really well with the Stage 2 parts, since a better exhaust means that the new turbo has a good companion. 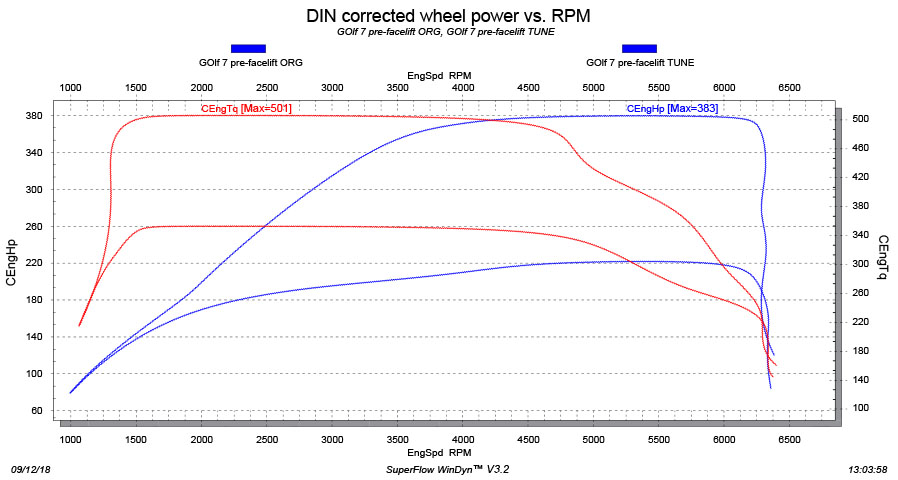 If you really want to go all the way, there is also a Stage 3+ which gives a new intercooler by Wagner for 10 hp more, making the VW Golf 7 by ZIP by far the fastest GTI hatchback out there.

Comparing the stock cars, the VW Golf 7 R was immensely faster than the GTI, even with the Performance package. Stage 1 brought them eye to eye, while the remaining upgrade stages kept moving the “lesser” model away from the best hatchback today, leaving it further behind with every new upgrade.

If you liked this contact us to see what we can do for your Golf GTI. We also offer tuning for many other cars and our higher stages tuning projects have a special place in the tuning industry. Make sure you learn why. 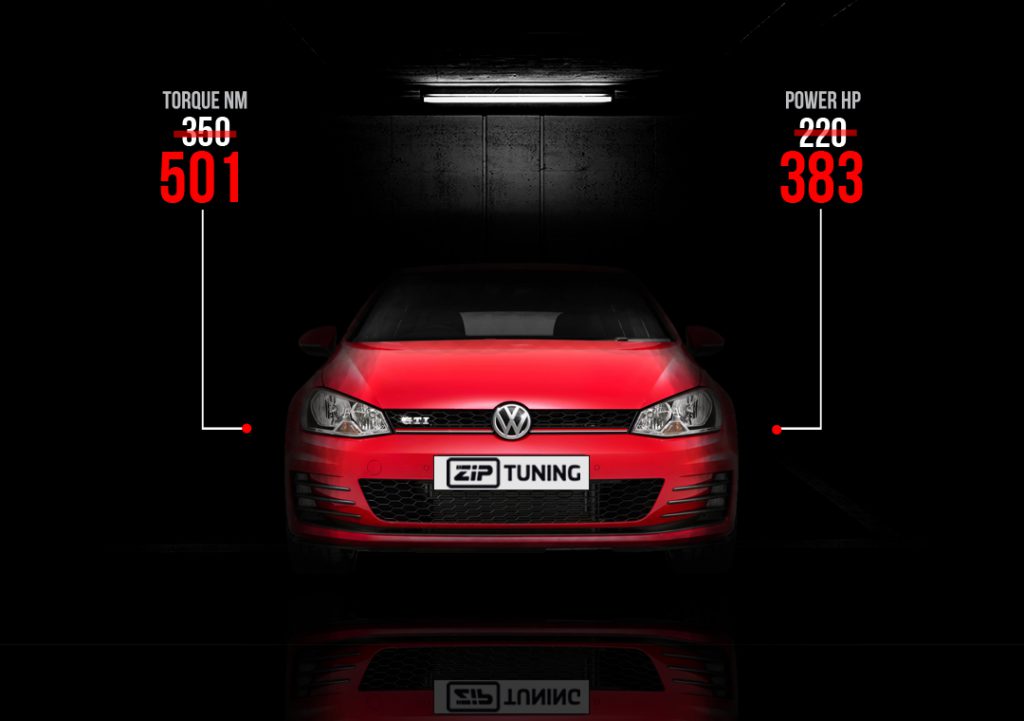