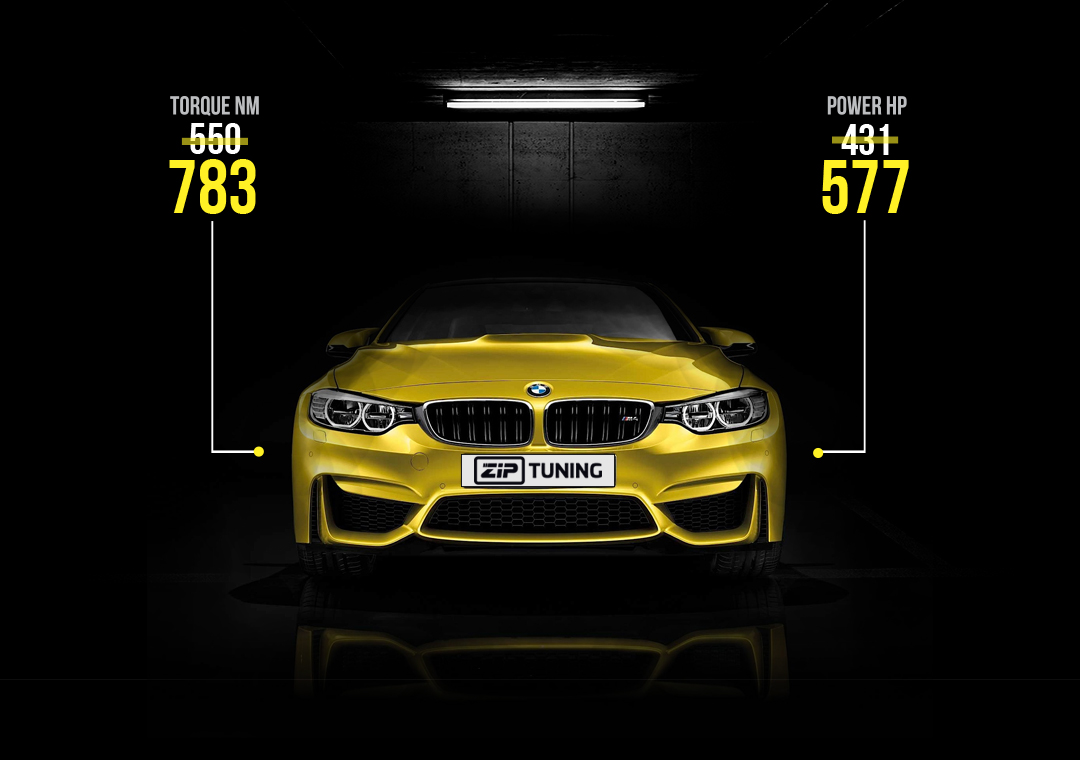 2014 was the year when the BMW M3 lineup changed a bit. The M3 name became reserved for the sedan only, while the coupe version became known as the M4. And it was just that – a new name for the coupe version and that was it. However, its cool design and a powerful 3 l six-cylinder S55.3.027 engine with two turbochargers providing 317 kW (431 hp) and 550 Nm (406 lb-ft) of torque made it an instant hit. In all honesty, it seems that the M4 is set to become one of those legends that were not among the most powerful cars of their era, but somehow remained beloved and more enduring than any of them. Remember the M3 E30? That’s what we have in mind.

However, aside from utter fun, competitiveness is the reason why people would buy such a car. And what is more important for a BMW M than beating a Mercedes AMG? Well, this is where the M4 falls behind. The most powerful version of the competing C-Class is the C63 AMG and its 4 l V8 chunks out 350 kW (476 hp) or 375 kW (510 hp) in the S version, both of which are more powerful than the M4 and reaching 62 mph 0.1 s and 0.2 s faster, respectively. However, the M4 has the potential to outdo both versions of the C63 AMG with a bit of ZIP tuning.

Adding 52 kW (71 hp) and 103 Nm (76 lb-ft) turned out to be available from stock parts. Modern cars have lots of software in them, so fine-tuning the Bosch MEDV17.2 OEM ECU was enough to provide 369 kW (502 hp) and 653 Nm (482 lb-ft) of torque. This was achieved using a three-step process. The first step is adjusting the turbo pressure in order to feed more air to the combustion chambers. The increased amount of air brings more oxygen to the cylinders, and it is oxygen that burns. 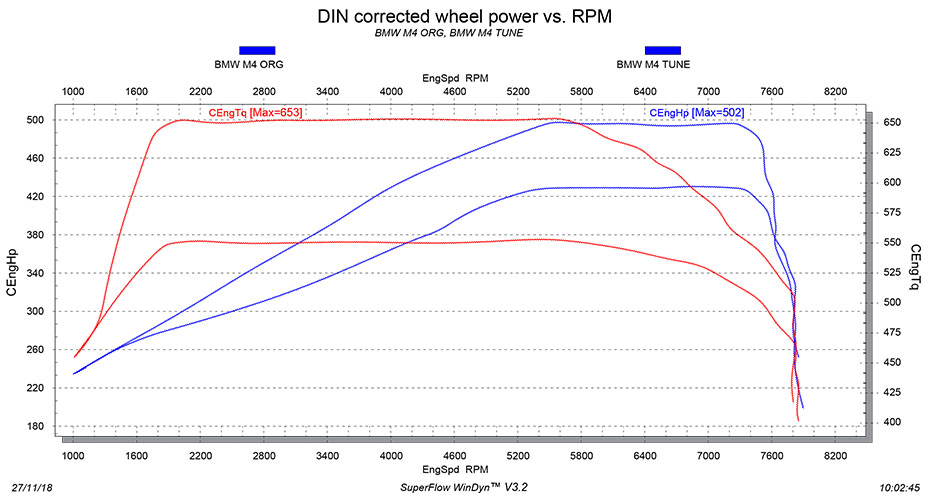 However, oxygen doesn’t burn by itself, but it needs petrol. The air-fuel ratio needs to be perfect to ensure good combustion, so adding a bit more petrol to the mix is a must.

Lastly, changing the ignition timing by sending the spark sooner gives three benefits. First of all, it improves combustion. This means that fuel efficiency is at higher levels. Lastly, setting the ignition time earlier significantly improves throttle response and this is something you can’t fail to notice behind the wheel.

As stock, the BMW M4 was already capable of going well over 250 km/h. Removing the speed limiter let it fly as fast as the new power rating allows.

All of the changes are completely safe, since the ZIP engineers provide the remap that carefully follows the original software architecture, never exceeding the safety limits stated by the manufacturer.

The ZIP Stage 1 makes the BMW M4 noticeably more powerful than the Mercedes C63 AMG, but still a step behind the C63 AMG S in terms of power, although the M4’s acceleration to 62 mph drops a notch under 4 seconds. Stage 2 fixes the power lack.

The ZIP Stage 2 BMW M4 tuning gives the total of 384 kW (522 hp) and 723 Nm (533 lb-ft) of torque. This power boost comes from two new parts. The first one is an air filter by Burger Motorsport, while the second one is at the other and of the internal combustion cycle. It is a new exhaust supplied by one of three very popular companies: Super Sprint, Akrapovic or Milltek. 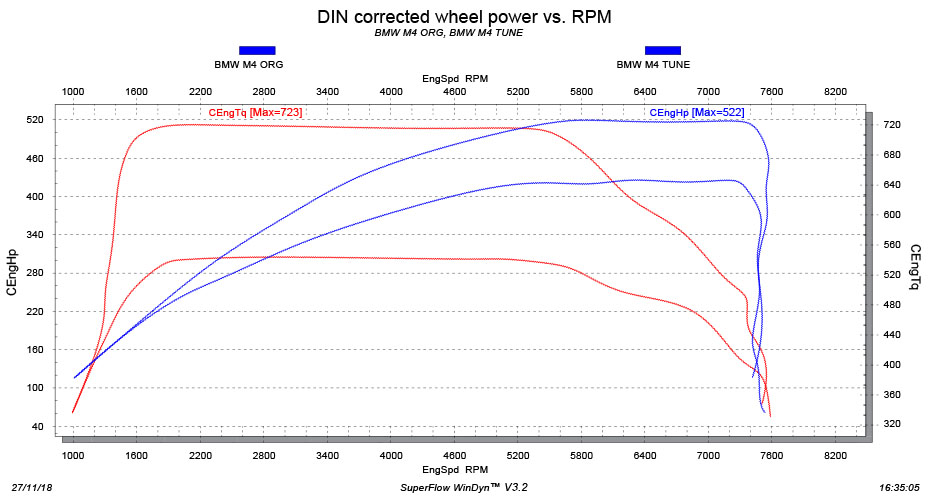 The software is adjusted again so that the new parts would feel at home. The upgrade gives the M4 more power than the C63 AMG S has and from that moment on, it is the most powerful car in its class. However, some might feel that the 20 hp margin may not be enough. And they would be right. This is why we have stage 3. 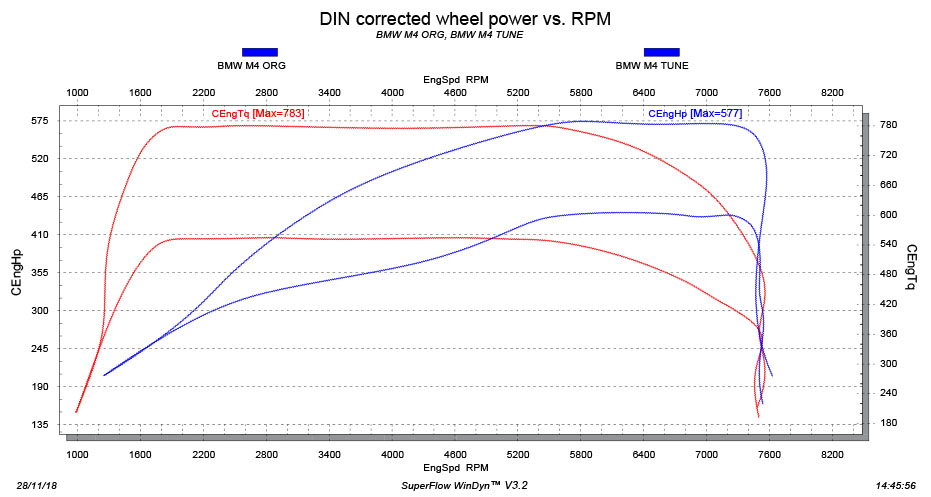 This is massive, especially in a car of this size and such a dynamic chassis. What you’ve probably missed is that the Stage 3 BMW M4 tuning results in 34% more power in what was already damn fast as a stock car.

Furthermore, even the Stage 1 leaves more hardcore versions of the M4 far behind. For example, the 2017 BMW M4 CS, with 460 hp, serves as a mid-step between the stock M4 and the beastly BMW M4 GTS. That one is rated at 500 hp, while our Stage 1 BMW M4 tuning of the regular BMW M4 is already rated at 502 hp. The Stage 3 puts it in a whole different class! 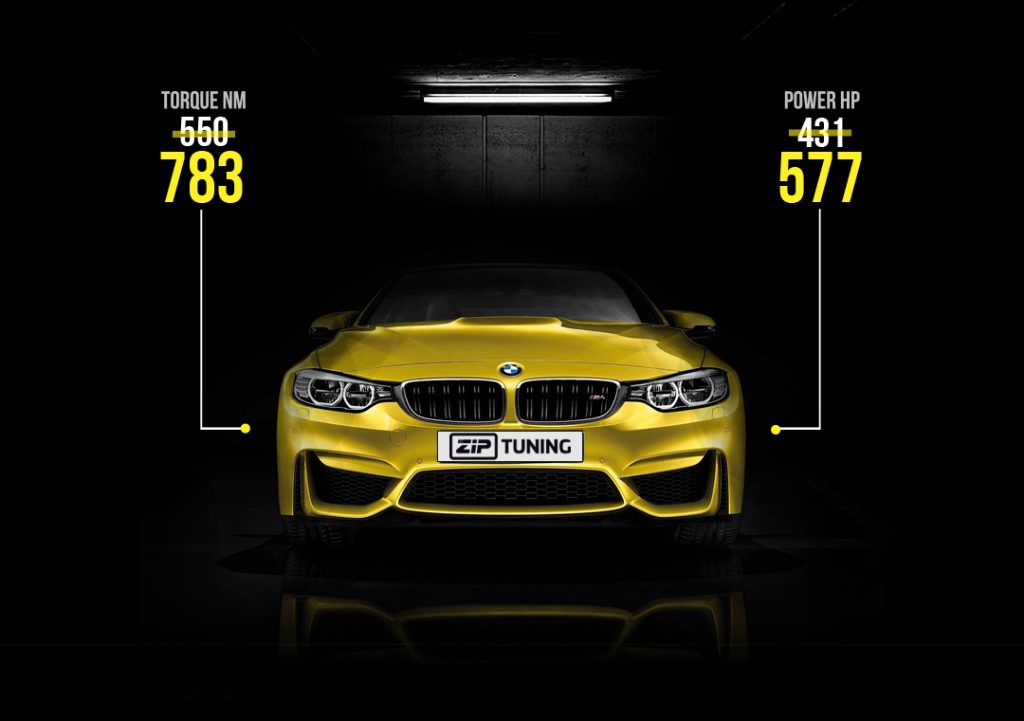