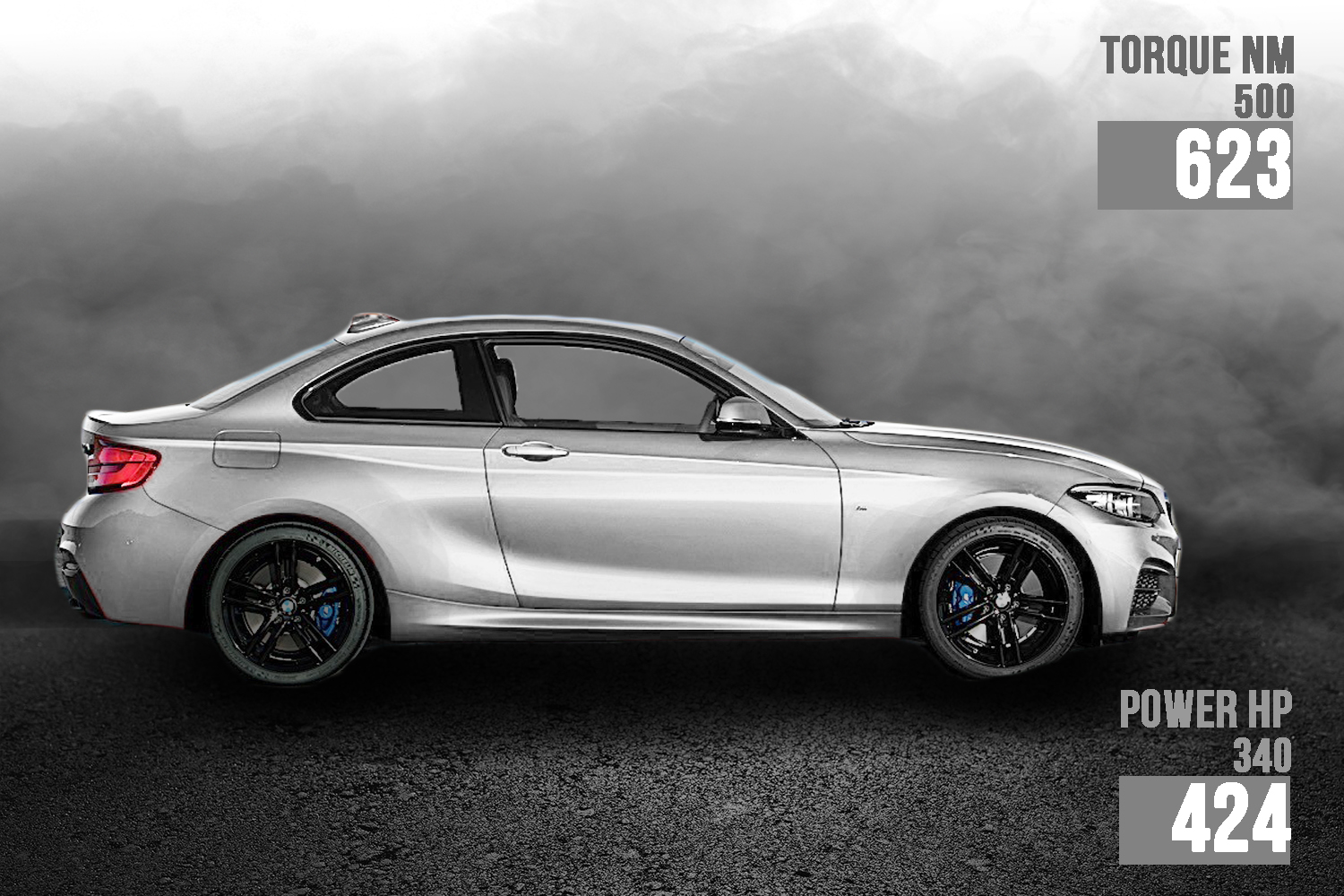 Small, lightweight, with a front-placed engine and RWD, the BMW 2 Series F22 is a proper sports car. Add to this the powerful turbocharged diesel and petrol engines and the F22 is one serious vehicle that makes use of the latest tech advancements, but still bears the flair of the old days. Add to this our M240i tuning results and you get one of the best cars to drive.

The engine range for the F22 2 Series is remarkable. You can choose between 11 petrol engine outputs and 6 diesel ones. The one we have here is a B58B30O0 3 I I6 with a twin-scroll turbo with, when in its stock form, 340 hp and 500 Nm of torque. Use of the twin-scroll turbo makes it possible for the engine to use the torque from just over 1500 rpm, which makes it as effortless to drive in all conditions.

However, it is not the most powerful version of the F22. In fact, there are two proper M models with N55 and S55 engines, respectively. The most powerful option is the M2 Competition launched in 2019 which produces 411 hp and 550 Nm of torque. In such a small car that is a huge amount of power.

On the other hand, being the M model and the most hardcore one, it is very expensive to buy and run.

This is why this customer of ours wanted to make use of his B58 and make it far more powerful. We calculated that our Stage 1 tuning for this vehicle would already make it as fast as the M2, but the owner wanted a better soundtrack also, so we changed some intake and exhaust parts and performed another remap to make use of the advancements. The result of our M240i tuning puts this wonderful machine above the M2 Competition by a noticeable margin in terms of power, but remarkably so in terms of torque.

And all that for less money than an M2 Competition would set you back.

Before we explain what benefits come from the Stage 2 that this customer got, let us go through the Stage 1, which is the most common adjustment people opt for.

We adjust the way that the engine works by changing the turbo pressure to add more air. The ratio between air and fuel is especially important for petrol engines, so the change in the amount of air requires a change in the amount of fuel. This is another ECU software tweak. Lastly, but very importantly, we adjust ignition timing. In lower RPM ranges we advance it to give the car more torque earlier. As the pressures build up, we retard it a bit and as the pressures start dropping again at the top end, we advance it a bit more to give that extra push. This results in a wonderfully wide torque curve and a throttle response that drastically changes the way this car feels to drive.

Still, the levels of all these adjustments need to be carefully monitored. Taking ignition timing as an example, going too far in any part of the RPM range can result in serious damage to the engine. This is why our meticulous measurements are of the highest importance. They allow us to reach the very borders, giving you as much power as possible, but never cross them, thus keeping the car completely safe.

With these changes alone we have previously managed to produce about 400 hp and 580 Nm of torque. This is a bit less power than in the M2 Competition, but noticeably more torque. However, this customer insisted that we outdo the M2 Competition, so we employed Stage 2 BMW M240i tuning.

The Stage 2 BMW M240i tuning actually adds just a bit more power. It includes some hardware changes to the intake and exhaust, introducing some aftermarket parts such as a new exhaust. Aside from providing a far better sound and a possibility for additional pop&bang tuning, it also improves breathing capacity of the engine, enabling more cold air at the intake side and easier riddance of the exhaust gases on the other end. 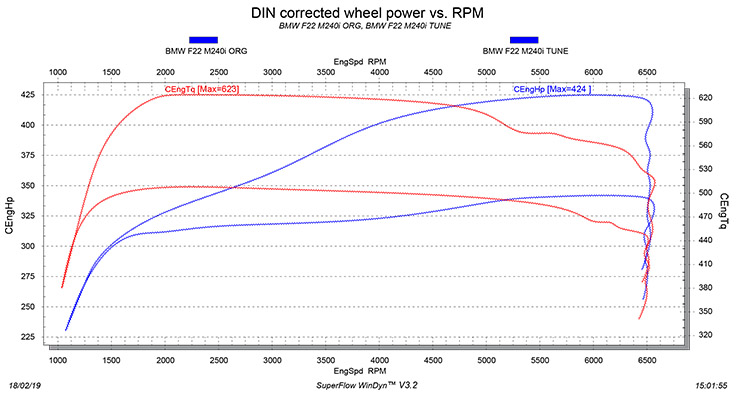 As you can imagine, this gave us more room to adjust the amounts of air and fuel, so we took the opportunity and produced lovely 424 hp and 623 Nm, pushing the tuned M240i well above the M2 Competition.

It is worth noting that changing the intake and exhaust makes room for Stage 3 as well. This step includes more elaborate changes such as a new turbocharger for even more air, and more hardcore injectors to supply more fuel. Stage 3 tuning projects can push almost any car to supercar territory.

If you would like to take advantage of our expertise, either as a private owner, or as a tuner looking to provide reliable services to your customers, feel free to contact us.