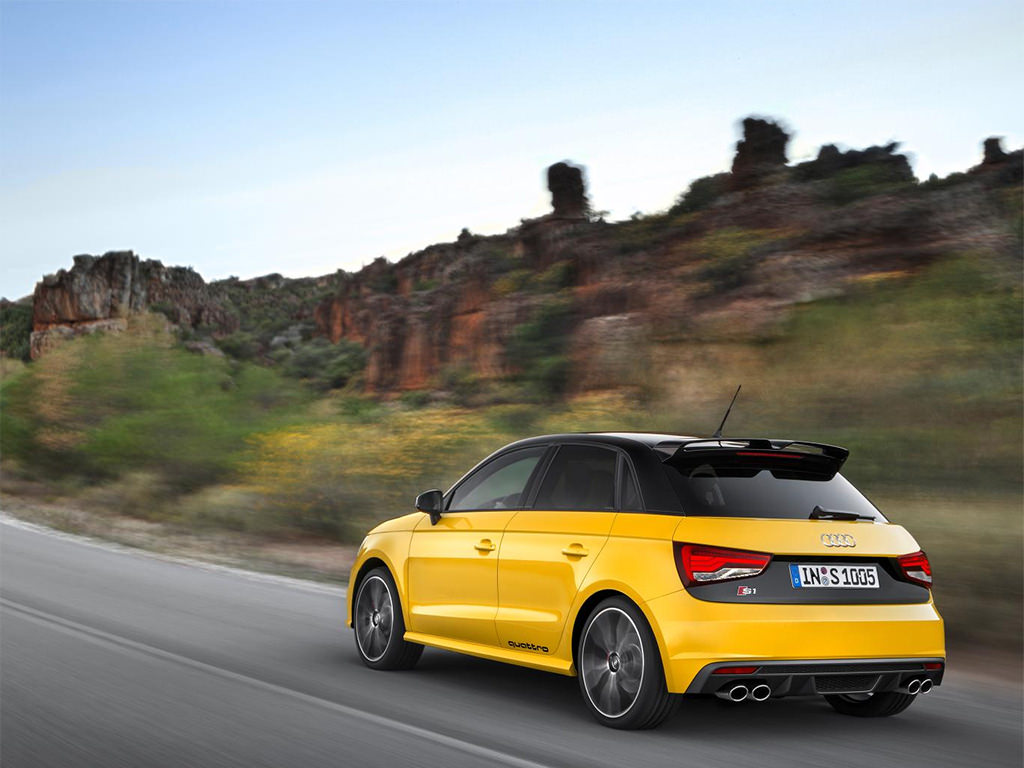 The fastest supermini around

The Audi S1 is already at the very top of the mini hot hatches in terms of performance. However, tuners wouldn’t be tuners if they were content with the status quo, so the S1 has several ways it can be improved. Engineers from ZipTuning have probably gone the furthest, providing three stages of performance upgrades for the 2.0 TFSI used in the S1. The Stage 1 Audi S1 tuning moves from the stock 170 kW (231 hp) and 370 Nm (273 lb-ft) of torque to 222 kW (302 hp) and 443 Nm (327 lb-ft) of torque by upgrading the ECU software alone. Stage 2 Audi S1 tuning introduces some hardware changes for the increase to 237 kW (322 hp) and 483 Nm (356 lb-ft) of torque. Adding a bigger turbo and fiddling with the OEM Siemens SIM18.1 ECU resulted in a pretty scary 283 kW (385 hp) and 506 Nm (373 lb-ft) of torque in such a small package, upping the power by 2/3 and making it the fastest car of its kind. This last set of upgrades is Stage 3 Audi S1 tuning.

The Audi S1 is a small hatchback with three or five doors created to serve as the sportiest version of the Audi A1. It is also one of the rare cars in its class to boast a standard quattro all-wheel drive. Powered by a 1984 ccm four-cylinder TFSI engine with 170 kW (231 hp) mated to a six-speed manual gearbox, the S1 is a real pocket rocket. It is more powerful than any of its competitors which include city racers like the Opel Corsa OPC, Citroen DS3 Racing, VW Polo R WRC Street and even the MINI John Copper Works, the latter being the only one providing the same amount of power as the S1. However, there are ways to make the Audi S1 even meaner. Three ways, to be exact.

ZIP chiptuning Stage 1 ups the power from 170 kW (231 hp) to 222 kW (302 hp) and torque from 370 Nm (273 lb-ft) to 443 Nm (327 lb-ft). This power boost comes from carefully planned and executed changes that start with an increase of turbo pressure which feeds more air to the cylinders, resulting in greater power output. Increased amount of air needs to be followed by complementing amount of fuel, so the air-fuel rate needs to be adapted to comply with the increased air load. The last adjustment stemming from the increased amount of air is adjusting ignition timing. All of these changes are performed with safety and reliability in mind, complementing each other and improving the car without stressing any of its components beyond company-stated limits. Lastly, they are all performed by adjusting the OEM Siemens SIM18.1 ECU.

But this is not all for the ZIP Stage 1 Audi S1 Quattro tuning. The last tweaks are removing the top speed limiter which kept the car at 155 mph and improving throttle response, which is even more noticeable on such a small car. The throttle response is so instant that you will get the feeling the car is reading your mind, reacting moments before you’ve pressed the pedal fully.

The increased throttle response and turbo pressure with accompanying ECU modifications bring extra 52 kW (71 hp) of power and 73 Nm (54 lb-ft) of torque, resulting in 0-62 mph time drop from 5.8 s to 3.9 s and the top speed of 177 mph. This means that the Audi S1 tuning makes the already almost unmatched car far better than anything out there of its class and in its price range.

And then there‘s Audi S1 Stage 2

All of the changes from Stage 1 remain in position, but ZIP Stage 2 remap and tuning adds several hardware novelties. For example, a new exhaust (by Super Sprint or Milltek) is added to allow the engine to rid itself of the exhaust gasses easier.

Next, a bigger intercooler by Forge Motorsport and a cold air intake by Revo Technik keep the increased amount of air reaching the cylinders colder.

Of course, all of these hardware additions are followed by adjusting the ECU software using data collected on a dyno to ensure smooth and safe operation of all old and new components and preserve their reliability.

Stage 3 Audi S1 tuning goes all the way, pulling out the big guns, i.e. bigger turbo and a blowoff valve. The turbo increases pressure even further and the valve deals with the surplus air. Of course, additions of these kinds require further software adjustments to make sure the ECU knows what it is dealing with and these are performed under controlled conditions in ZIP workshops.

Whichever tuning stage you opt for, the tuned Audi S1 will benefit from far better efficiency and you will feel it behind the wheel. The tiny car will tear asphalt with the additional torque, go faster than almost anything else on the road due to the increase in horsepower and jump at the very thought of pressing the pedal to the metal due to improvements is software and throttle response. The standard S1 is already very competitive; Stage 1 tuning makes it well faster than the exclusive and significantly more expensive 188 kW (256 hp) A1 Quattro made in only 333 units; Stage 2 goes further separating it from pretty much anything else on the road, while Stage 3 turns the capable city racer into a full-blown street legal racecar.

Contact us for more information on what we can do to make your car a lot more interesting.