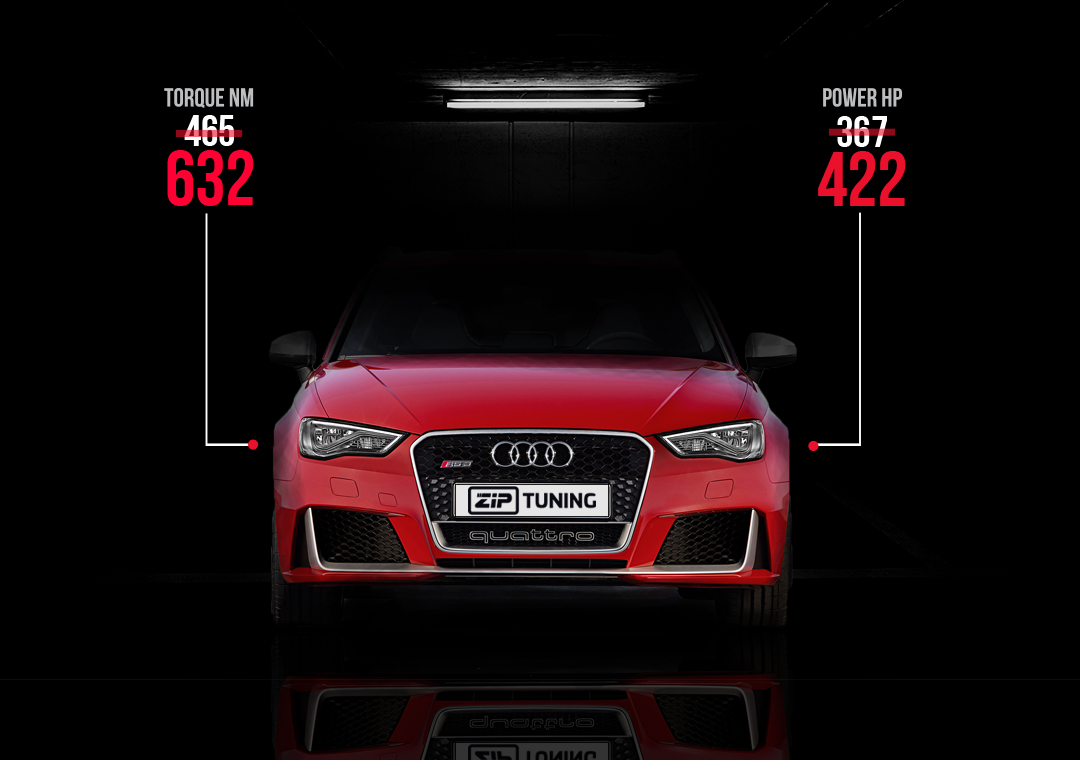 Audi RS3 Chiptuning – The hottest of the hatches

The Audi RS3 is amazing. The first version of it came out in 2011 and it was a wet dream of almost any car enthusiast, boasting 250 kW (340 hp) from a 2.5 l turbo engine and featuring lowered body, better suspension and more for the acceleration to 62 mph (100 km/h) of just 4.6 seconds. The S tronic seven-speed automatic transmission with a manual mode and four-wheel drive Quattro on-demand system made it a proper entertainment on the road. In 2015 the new version of the RS3 appeared, bringing similar features, but also upping the power to 270 kW (367 hp) and massive 465 Nm (343 lb-ft) of torque. This dropped the acceleration to 62 mph (100 km/h) to just 4.3 seconds – faster than many sports cars. But, the 27 horsepower increase between the two generations is minuscule when compared to what tuners have to offer. ZIP Tuning provides the Audi RS3 chiptuning with probably the biggest push compared to all others, adding some software tweaks for the power bump to 310 kW (422 hp) and 623 Nm (460 lb-ft) of torque, making it the fastest offering on the market in its class, as well as in several higher classes.

The Audi A3 came in the second half of the 1990s serving as a cheaper way to get your hands on an Audi. Its affordability and quality made it very popular and in time it became a very important model for the brand. This resulted in several special edition models, electric and hybrid concepts and other hints which tell us that the A3 is here to stay. For a while, the most powerful version was the S3, currently in its third generation boasting 300 horsepower in such a small car. However, 2011 brought another, more powerful addition to the A3 lineup – the RS3. The first generation of the RS3 featured a 2.5 l L5 turbocharged powertrain providing 250 kW (340 hp), which helped the Quattro-driven car to reach 100 km/h in just 4.6 seconds. A 2015 revision brought 27 horsepower more topping out at 270 kW (367 hp). However, other manufacturers have jumped on the bandwagon in the past few years, Mercedes-Benz offering the CLA45 AMG with 265 kW (360 hp) and even a more powerful and more recent version. So, how do you make your Audi RS3 stand out? Tuning is the answer.

The first stage of the Audi RS3 remap brings a noticeable power increase of 40 kW (55 hp) and 158 Nm (117 lb-ft) of torque. This was achieved using strictly OEM parts already present in the car, since the power bump comes from remapping the OEM ECU software without adding any aftermarket parts.

This is why other tweaks are needed as well. First of all, the increased amount of air that now reaches the cylinders needs a sufficient amount of fuel in order to improve combustion, so adjusting the air-fuel ratio is the next logical step.

Another combustion-improving tweak is moving the ignition to an earlier stage. Aside from putting together the two previous modifications, the ignition timing change also brings one huge driving perk. It noticeably improves the throttle response and this is something that even novice drivers will be aware of.

These three changes work together to create a smoothly performing system which is as safe as it is rewarding in terms of power gain, now reaching 310 kW (422 hp) and 623 Nm (460 lb-ft) of torque. All of the component protection limitations are still in function as the newly gained power comes from modifications that never go over the limits that Audi states safe. So, yes, the Audi RS3 chiptuning done by ZIP Tuning is as safe and as reliable as can be. The car is simply a lot faster. 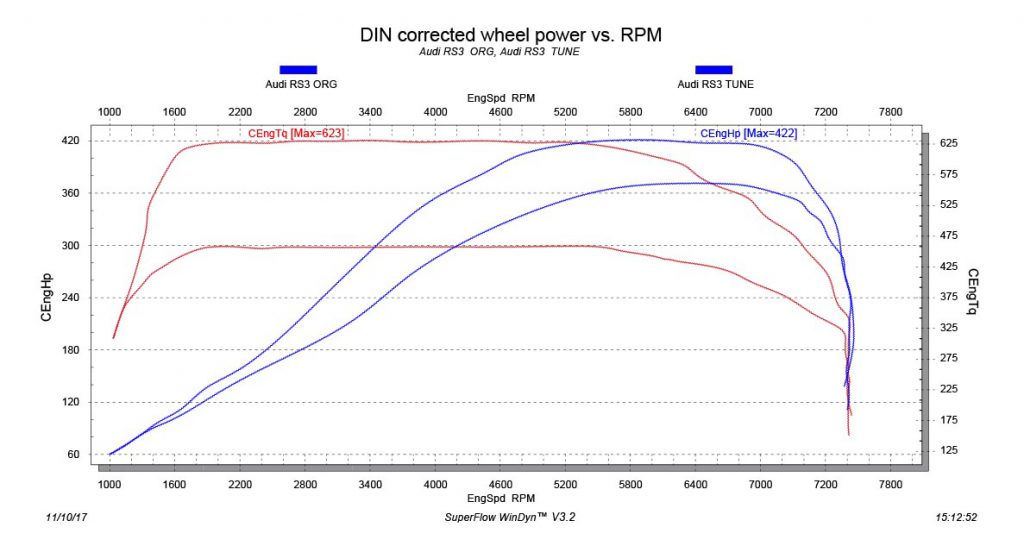 You know what else? It is also faster than the latest version of the RS3. Audi tuned that one to 400 hp, but ZIP engineers added noticeably more with the 2015 model as basis. This way we can provide far more power for far less money than you would spend buying the latest RS3. The owner who enjoys the 2015 Audi RS3 chiptuning performed by ZIP Tuning is in love with his old but completely different car.

Can we tune the newest one? Oh, yes. We’ll share the information soon, so stay tuned. If you can’t wait any longer and you need to tune the latest RS3, contact us and let us fulfill your dreams.

However, there is more. The ZIP Stage 1 Audi RS3 remap also includes removal of some limitations that the factory has bestowed upon the car, such as fuel cut off, or top speed limiter. The stock Audi RS3 is electronically limited to 155 mph (250 km/h), so it means that it is capable of more. Adding 40 kW (55 hp) together with removing the top speed limiter actually means that the Audi RS3 can go all the way up to 186 mph (300 km/h).

Lastly, the car is fairly new, so aftermarket parts created by revered manufacturers should appear soon. For example, Milltek has already presented an exhaust for the new RS3, which means that we’re a few intake parts away from a Stage 2 Audi RS3 chiptuning. Stay tuned… 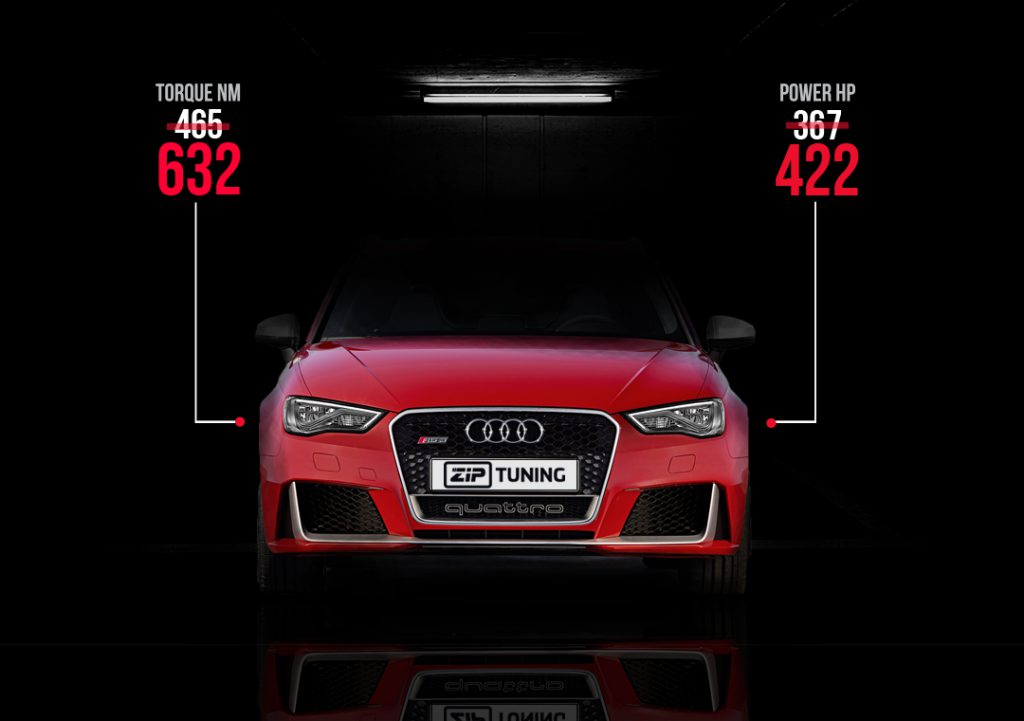