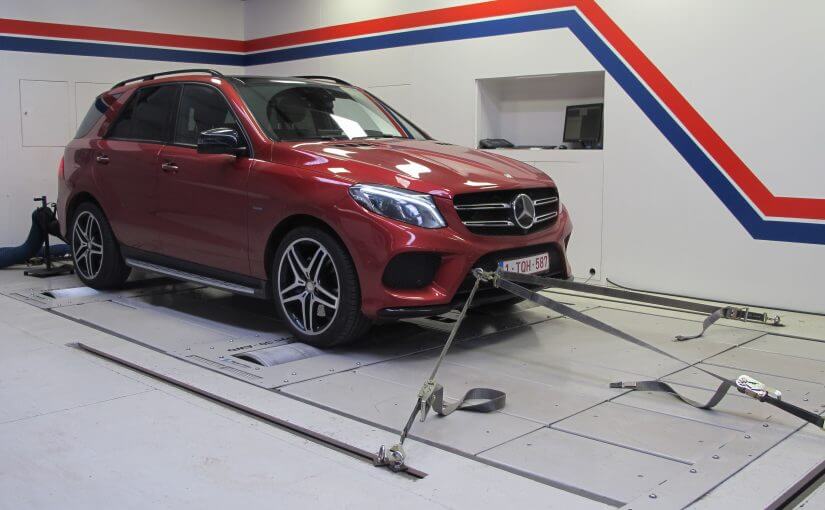 Mercedes-Benz GLE 500e Tuning – Power, Torque and Efficiency all in One

The downsizing trend mostly has to do with emissions regulations. As new technologies weren’t developing fast enough to match the ever-tightening government requirements, manufacturers had to make the engines smaller in order to make them less damaging to the environment.

However, making engines smaller also often makes them less powerful and, aside from pleasing regulatory bodies, manufacturers also have to please customers who want power on tap.

So far there have been two ways of putting these two worlds together. The first one is reducing the engine size, for example from a V8 to a V6, which makes the car less powerful, but adding one or two turbochargers. Even three in some cases. BMW M550d is an example of this. Also, Mercedes managed to give their latest 4.0 biturbo V8 far more power than in the previous 6.2 l NA V8, despite considerable drop in size.

However, this option is reaching its limits. The second one seems to have more potential. It is using a turbo V6 instead of a V8, but adding an electric motor to the mix. It increases the power, gives instant torque, reduces emissions and fuel consumption and matches and often exceeds the performance merits of the V8.

A great example is the Mercedes-Benz GLE 500e. Being a 500, one would assume it’s a V8, but the ‘e’ shows it’s a hybrid. However, the 500 moniker is rightfully used, as this car gives the power of a V8 with the unprecedented green credentials. The power now comes from a combination of a turbo 3 l V6 and an electric motor. The combined power rating stands at 422 hp and massive 650 Nm of torque and the V6 alone gives some 329 hp. Another big benefit of the hybrid powertrain is that the electric motor delivers all its torque from 0 revs. This makes hybrids with good motors very responsive, although the weight of batteries somewhat diminishes the benefit. The GLE 500e weighs about 2,500 kg, for example. 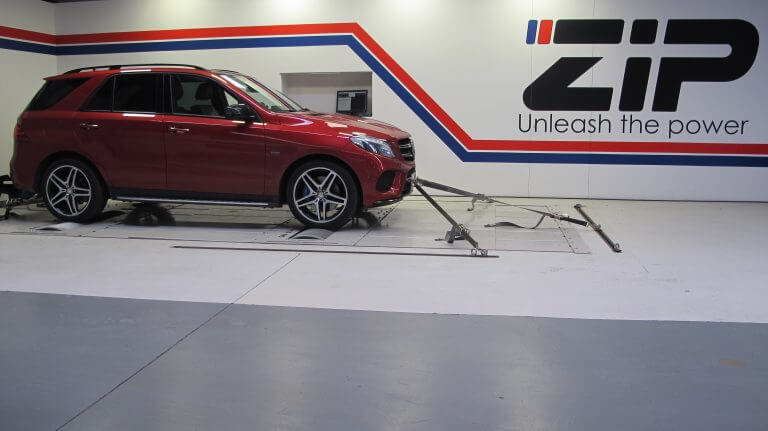 Despite the weight, the standard car reaches 100 in respectable 5.3 seconds and allows for an emissions-free ride of up to 30 km and with speeds up to 130 km/h. Pretty handy, right?

Can you tune hybrid cars?

Yes! The whole system needs to work well together and it requires expertise, experience and top of the line testing equipment.

We have all that. We have already tuned many hybrid cars, including a very interesting BMW 330e iPerformance and Porsche Panamera Hybrid for the first season of National Geographic’s Supercar Megabuild series. The latter alone should show the expertise we boast.

Now it is time for the Mercedes-Benz GLE 500e Tuning!

The tuning we developed for this particular car includes changes to the amounts of air and fuel sent into the engine, as well as an adjustment in ignition timing. All these changes need to work well together and also complimented the hybrid powertrain so extensive testing and data logging is of the highest importance.

First of all, we increased the turbocharger pressure for the internal combustion V6. This modification increased the amount of air that the engine is fed. The additional air needs to be followed by an adjustment in the amount of fuel that is sent into the cylinders. This is so because having proper air-fuel ratio improved combustion, longevity and performance.

It is also very important to know what the limitations are to every engine and its surrounding components. Going too far can cause serious damage. We never exceed safety limitations.

The final part of these adjustments is adjusting the ignition timing. Ignition timing is advanced in order to provide better combustion and more immediate throttle response. Combined with the instant torque delivery of the electric motor, the added power from the tuning and the improved throttle response, it is remarkable just how well, after our GLE 500e tuning, the hybrid reacts to every push of the pedal.

As already explained, simply adding more power to the internal combustion unit is not enough. The entire hybrid system needs to work in unison across the rev range and the combined power output needs to reflect that.

As you can see in the images below, we had two sets of changes for this tuning process. 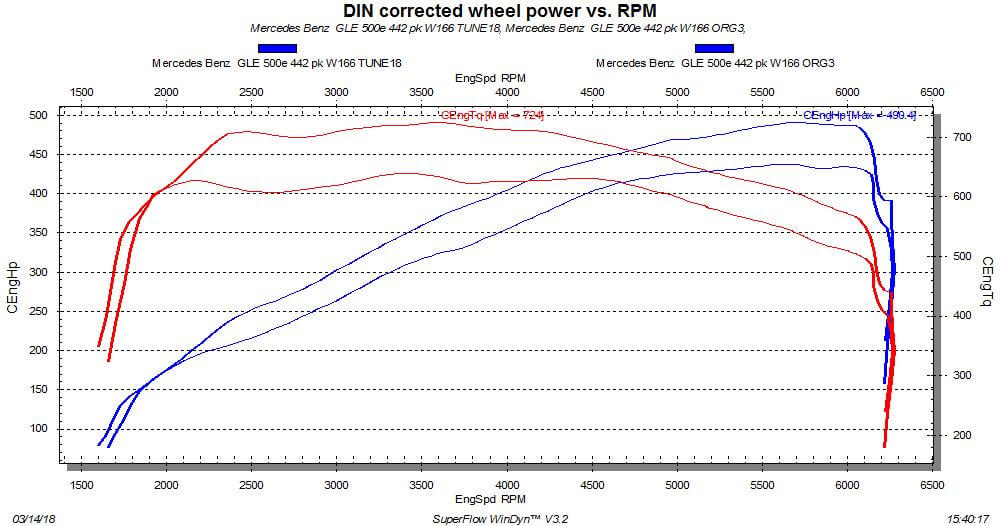 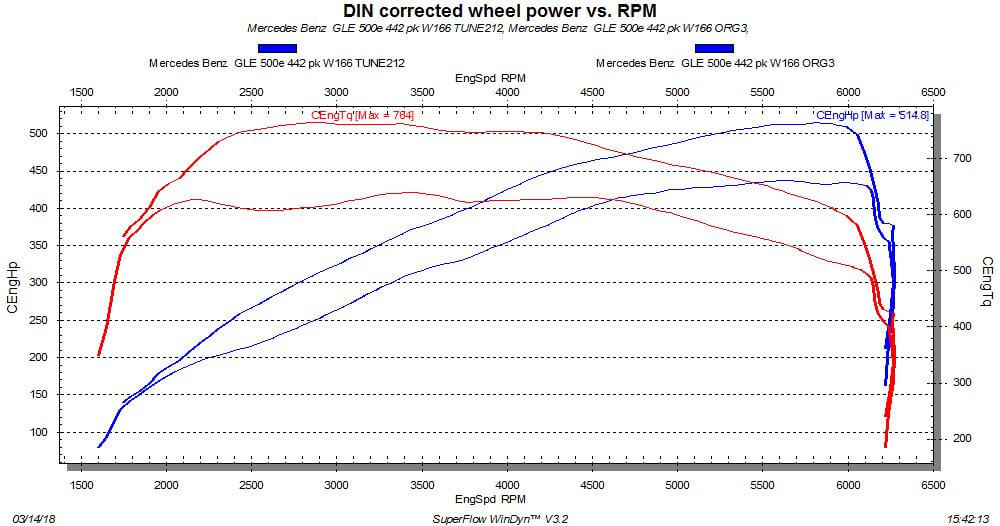 The three previously explained adjustments (fuel, air and ignition timing) hide many more intricacies, especially the latter. The figures above show the highest power and torque ratings within the rev range. However, when driving a car, you are not always in the top rpm position. In fact, in everyday conditions, you’re rarely or never there.

This is why it is important to make the car drivable and the power and torque available in as wide a range as possible. This is why extensive testing and fine-tuning play the biggest role for our GLE 500e tuning.

For example, while adjusting ignition timing for this car, we don’t simply advance it to the same level for the entire rev range. For low rpm sections we advance timing in order to give the car more boost in the rev range where it usually lacks push. As we approach rpm that has more torque in stock setting, we retard the timing a bit so as to preserve safety. Higher in the rev range, as the torque figure starts to drop again, we advance timing once again to give it a rise. All these put together mean that the Mercedes GLE 500e gets a wider torque curve which it can use effectively in everyday driving without any worries of causing damage or reducing durability and reliability of the car.

Getting the best possible timing is also very important for using the energy efficiently. Combustion inside the engine is not an explosion, but a flame front, which means that it spreads and increases the pressure inside the cylinder as it does so. This spreading is very fast, but it does require some time.

For this Mercedes, we performed multiple tests to find just the perfect moment for ignition – the moment when the mixture would ignite and start increasing pressure and then reach the top pressure exactly when the engine can make the best use of the force generated. This is the point at which connection rod inside the engine can transmit the largest amount of energy to the crankshaft.

Basically, we targeted this point by starting the ignition earlier and building up the pressure inside the cylinder making it reach the highest level at that exact point. 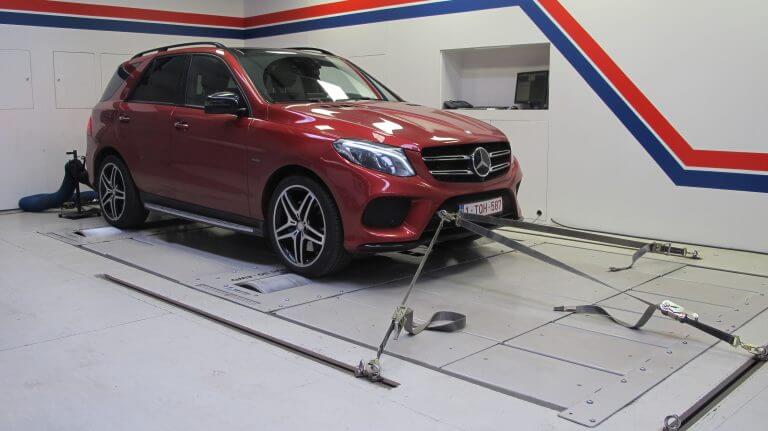 We have mentioned the importance of testing and safety several times, but it really can’t be stressed enough. The above paragraphs gave you a better insight into our tuning process for this car, but getting the information necessary for such precise modifications for our GLE 500e tuning can only come from plenty of tests and extensive data logging.

However, gathering this information isn’t the most important thing at all. While testing and data logging, we could carefully monitor the stress levels and temperatures generated throughout the combustion process. For example, logging lambda sensor data allowed us to make sure we will never cause engine knock.

Measuring the temperature of the exhaust gas enabled us to prevent any chance of causing damage to the turbocharger and the entire exhaust system.

Having information and experience with the drivetrain allowed us to be sure that torque levels would never exceed the limits that the gearbox can endure.

Even if we decided to neglect safety for some reason (and we never do that), testing is very important because there is no way to produce top quality tune without gathering information that only testing can give. Tuning without testing is a terrible idea as you can imagine what the possibility is of making all of the above perfect by guessing the values. NONE!

This also lets us make the car more powerful than other tuners. We know the safe limits and we can approach them with confidence knowing we will never cause damage. The ones who neglect extensive testing always need to go well below the boundaries to be sure that they won’t destroy your engine. This gives less power and torque, while at the same time not guaranteeing safety.

Exactly the opposite of what we do!